We examined some old reloads in 7.62×51 NATO fired through an M-14 and found many with split necks as well as other general signs of the end of case life.  One of the biggest clues was the appearance of a bright ring just ahead of the case web.  I split one a random case which exhibited a modest ring.  This was NOT the worst of the bunch, mostly because I didn’t want to spend time searching for it last night.  The case is however representative of the lot. Presumably the worst example would be more extreme. The batch of ammo these cases came from was a mongrel collection of assorted case lots and clearly labeled as “practice” so I suspect that back in 1988 I had already decided that this was their last reload.

The results below clearly demonstrate what is happening inside the case just ahead of the web.  What doesn’t show well in the photos is the fact that with the naked eye, you can discern a small furrow running fully around the inside just ahead of the base of the case.  The cross sections below show the thinning in case profile marked with RED ARROWS.  The BLUE ARROWS point out some internal examples of case neck splits.

This case would probably have survived yet another reloading if the bright ring had been the only problem, but the question eventually becomes one of, at what cost? These cases were suffering numerous issues, the coup de grace being the case neck splits anyway.

Why do we care?  Well I guess we would prefer that they didn’t blow up, but beyond that…

Quite simply the case is the most expensive part of your cartridge.  Most reloaders buy factory loaded ammunition and upon the initial firing create a supply of once fired cases in the process. Hard core reloaders using bolt actions will do this almost routinely using the custom “Fire Formed” cases in that particular rifle exclusively.  In fact until the case is fire formed, they don’t even consider the case as worth much of anything, so why spend money and time reloading new cases, when that shot is mostly to form the case anyway? From that point on they will neck size the cases only. 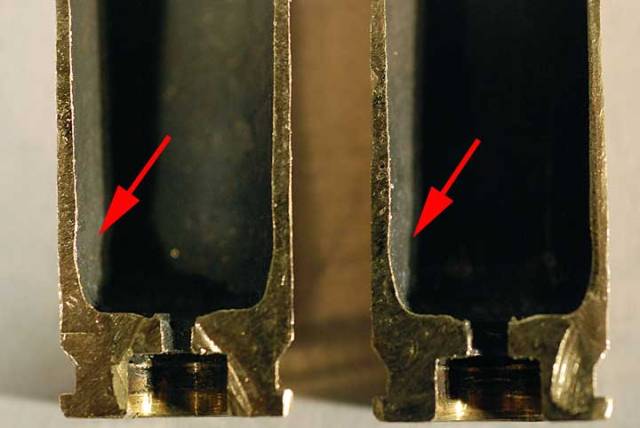 If you’re firing semi-auto, then full length resizing is virtually a given and you will see this happening much more quickly.  While you can purchase new unfired empty brass, many shooters simply look at creating once fired cases as part of the fun!

I have many hobbies and spend a fair amount of time playing at them. I'd love to spend more, but there's this earning a living thing... So I often fill my idle hours spewing forth ideas and opinions, unsolicited or not. This is merely an extension of that propensity.
View all posts by Gary L. Miller →
This entry was posted in Reloading for the Rifle!, The Arts of the Fusilier and tagged AMMUNITION, cartridge, cartridge preparation, hand load, RELOADING, riflery, Shooting. Bookmark the permalink.